Another
Piece of WW-II Aircraft History!

Keep
in mind, this aircraft was built in the 1940s.  It resembles our Stealth
bombers of today.  Had Hitler got these into production sooner, the world
wouldn't be what it is today.

With
its smooth and elegant lines, this could be a prototype for some future
successor to the stealth bomber.  But this flying wing was actually
designed by the Nazis 30 years before the Americans successfully developed
radar-invisible technology. Now an engineering team has reconstructed the
Horten Ho 2-29 from blueprints, with startling
results. 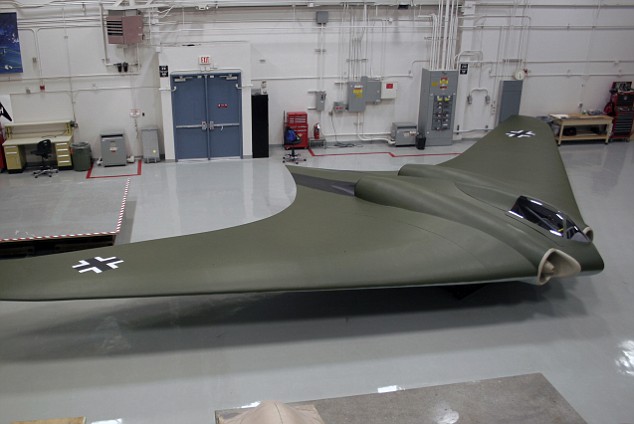 Blast
from the past: The full-scale replica of the Ho 2-29 bomber was made with
materials available in the 40's. 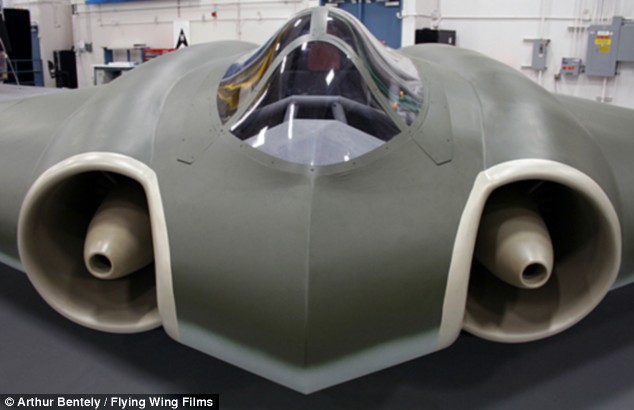 Futuristic:
The stealth plane design was years ahead of its time.  It was faster and
more efficient than any other plane of the period and its stealth powers did
work against radar.  Experts are now convinced that given a little bit
more time, the mass deployment of this aircraft could have changed the course
of the war. 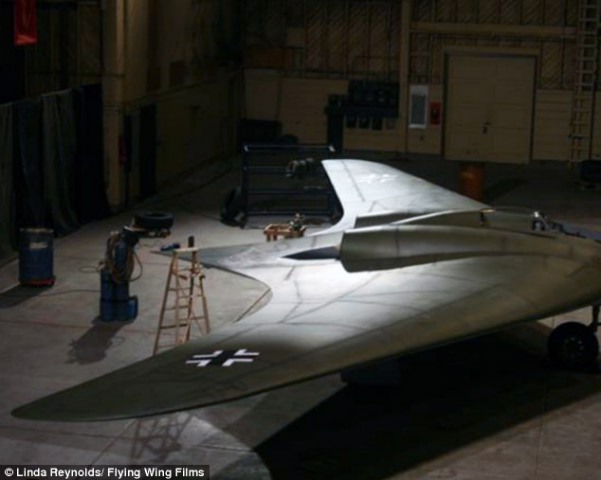 The
plane could have helped Adolf Hitler win the war

First
built and tested in the air in March 1944, it was designed with a greater
range and speed than any plane previously built and was the first aircraft to
use the stealth technology now deployed by the U.S. in its B-2 bombers.
Thankfully Hitler's engineers only made three prototypes, tested by being
dragged behind a glider, and were not able to build them on an industrial
scale before the Allied forces invaded.
From
Panzer tanks through to the V-2 rocket, it has long been recognized that
Germany 's technological expertise during the war was years ahead of the
Allies.
But
by 1943, Nazi high command feared that the war was beginning to turn against
them, and were desperate to develop new weapons to help turn the tide.


Nazi
bombers were suffering badly when faced with the speed and maneuverability of
the Spitfire and other Allied fighters.  Hitler was also desperate to
develop a bomber with the range and capacity to reach the  United States
.

In
1943 Luftwaffe chief Hermann Goering demanded that designers come up with a
bomber that would meet his requirements, one that could carry 1,000 kg over
1,000 km flying at 1,000 km/h.

A
full scale replica of the Ho 229 bomber made with materials available in the
1940s at preflight. 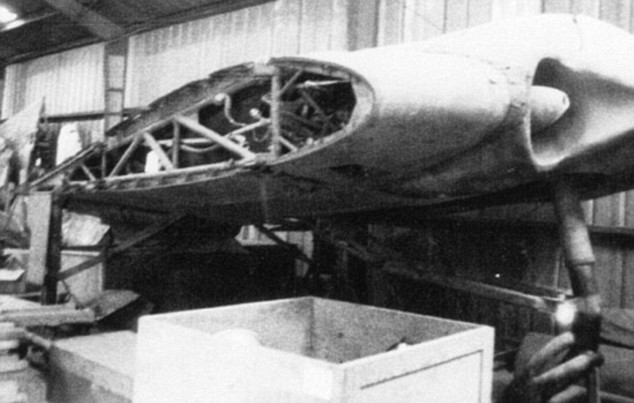 A
wing section of the stealth bomber. The jet intakes were years ahead of their
time. Two pilot brothers in their thirties, Reimar and Walter Horten,
suggested a flying wing design they had been working on for years. They were
convinced that with its drag and lack of wind resistance such a plane would
meet Goering's requirements.

Construction
on a prototype was begun in Goettingen in Germany   in 1944.

The
centre pod was made from a welded steel tube, and was designed to be powered
by a BMW 003 engine. The most important innovation was Reimar Horten's idea to
coat it in a mix of charcoal dust and wood glue. 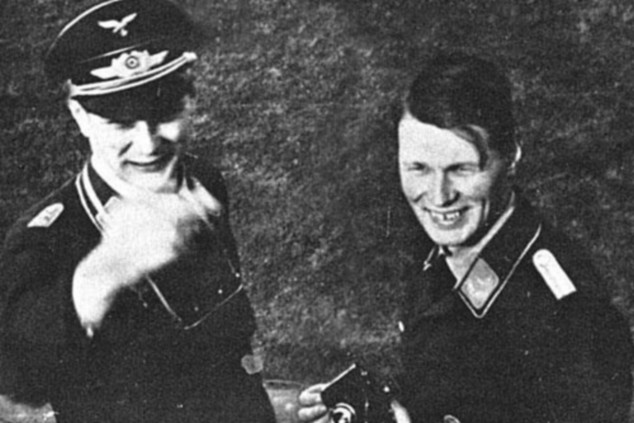 Vengeful:
Inventors Reimar and Walter Horten were inspired to build the Ho 2-29 by the
deaths of thousands of Luftwaffe pilots in the  Battle   of Britain
.


The 142-foot wingspan bomber was submitted for approval in
1944, and it would have been able to fly from  Berlin   to NYC and
back without refueling, thanks to the same blended wing design and six BMW
003A or eight Junker Jumo 004B turbojets.

They thought the electromagnetic waves of radar would be absorbed, and in
conjunction with the aircraft's sculpted surfaces the craft would be rendered
almost invisible to radar detectors.  The  plane was covered in
radar absorbent paint with a high graphite content, which has a similar
chemical make-up to charcoal.  This was the same method eventually used
by the  U.S.   in its first stealth aircraft in the early 1980s, the
F-117A Nighthawk.

After
the war the Americans captured the prototype Ho 2-29s along with the
blueprints and used some of their technological advances to aid their own
designs.  But experts always doubted claims that the Horten could
actually function as a stealth aircraft.

Now using the
blueprints and the only remaining prototype craft, Northrop-Grumman (the
defense firm behind the B-2) built a full-size replica of a Horten Ho
2-29. 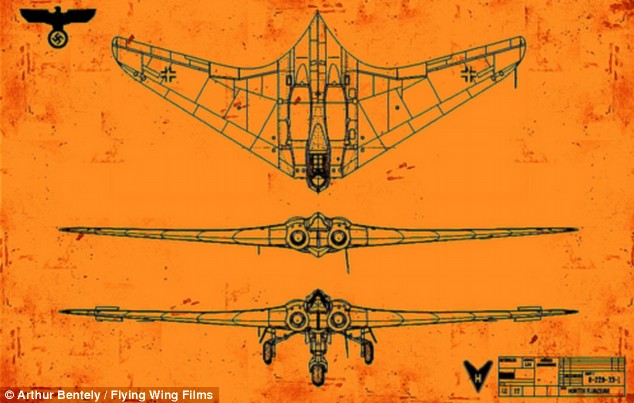 Luckily
for  Britain , the Horten flying wing fighter-bomber never got much
further than the blueprint stage above. 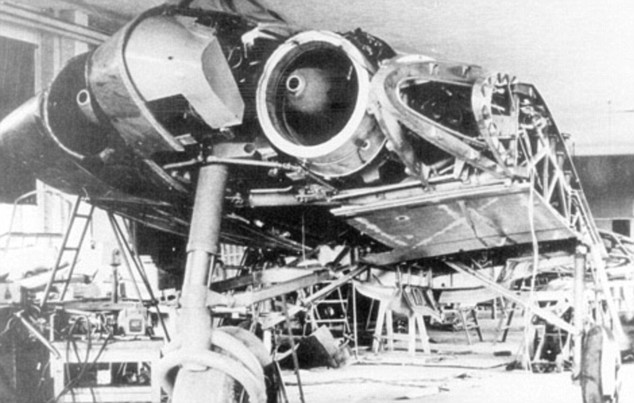 Thanks
to the use of wood and carbon, jet  engines integrated into the fuselage,
and its blended surfaces, the plane could have been in London   eight
minutes after the radar system detected it.  It took them 2,500 man-hours
and $250,000 to construct, and although their replica cannot fly, it was
radar-tested by placing it on a 50 Ft articulating pole and exposing it to
electromagnetic waves.  The team demonstrated that although the aircraft
is not completely invisible to the type of radar used in the war, it would
have been stealthy enough and fast enough to ensure that it could reach
London   before Spitfires could be scrambled to intercept
it.

If
the Germans had had time to develop this aircraft, it could well have had an
impact, says Peter Murton, aviation expert from the  Imperial
War   Museum  at Duxford, in Cambridgeshire.

In
theory the flying wing was a very efficient aircraft design, which minimized
drag.   It is one of the reasons that it could reach very high
speeds in dive and glide modes and had such an incredibly long range.

The
research was filmed for a forthcoming documentary on the National Geographic
Channel.